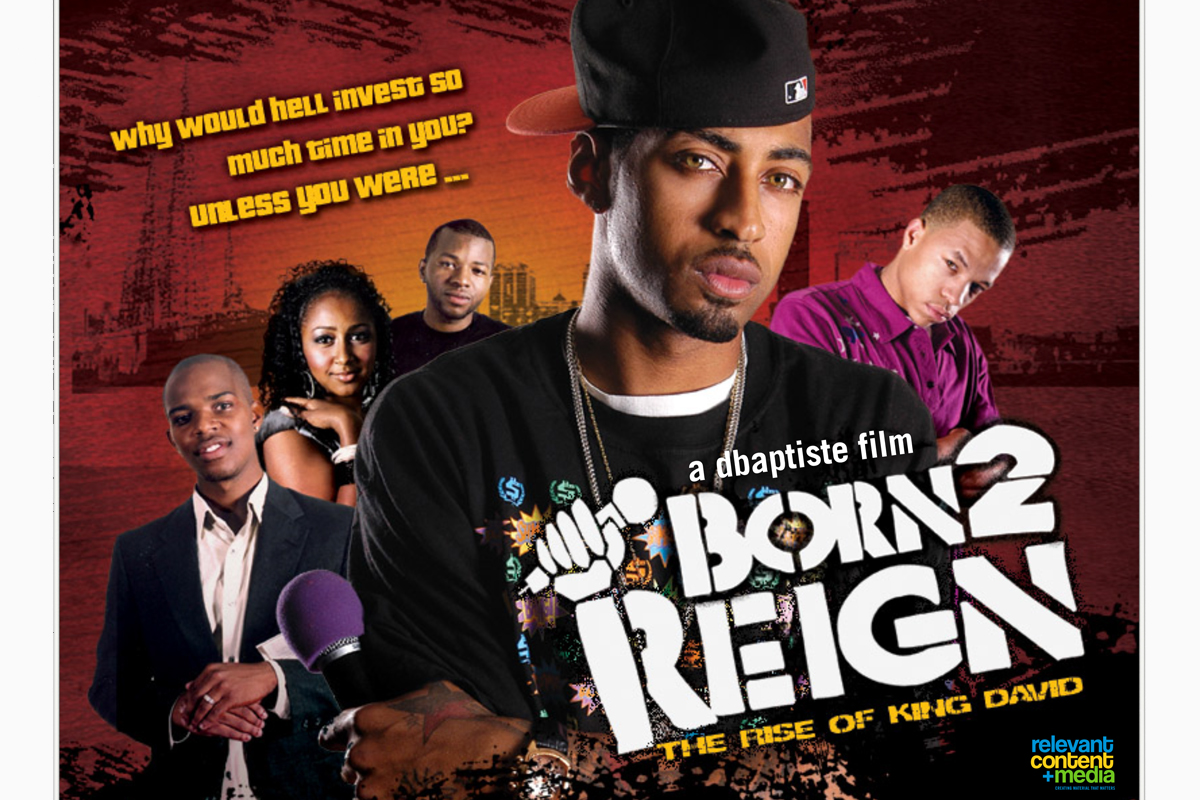 Born 2 Reign is the biblical story chronicling the rise from shepherd boy to the King of Israel as told on a college of the arts campus. When a prominent rap artist (Saul) takes on a protégé (David) tension soon surfaces between the two when they compete to determine which one of them is future King of the Twelve Colleges.

In The Vein Of…

On the King’s College campus the Gospelfest talent show is under way. KING SAUL, 20, a talented rapper and performer, owns the stage as the college’s most popular student. He wows the crowd with his flows but also has time to notice a few promising beats laid down during another performance. Saul’s younger brother and manager, JONATHAN, approaches the young man responsible for the beats, DAVID. Not long after that Jonathan hooks David up with SAMUEL, the chancellor at the college, and Samuel believes in David’s talent and talks with him and his unsupportive and jealous family. David is offered the chance to attend school at King’s College and also work on his music. David is thrilled at the opportunity and Samuel is anxious to have him aboard. Every year King’s College is one of a group of universities competing for the Arc of Life grant worth twelve million dollars. Whichever college demonstrates the most talent at the competition gets the money and despite King Saul’s talent and promises King’s College hasn’t won the grant in years.

Saul takes David under his wing and teaches him the ropes. David is quick learner and demonstrates his own abilities as well, impressing Saul. At the same time David meets Saul’s younger sister, MICHAL, and they begin to flirt. Saul and Jonathan are less than thrilled about the potential relationship but David feels strongly about Michal and follows through on those feelings. Soon the two are spending countless days together, their relationship growing. At the same time David’s relationship with Saul is slowly deteriorating. Saul is under a lot of pressure because he signed a record deal with a dangerous man named MCCOWAN who wants to show some profit for the capital he laid out. However Saul has been unable to sell a great deal of records yet and asks for more time. McCowan expresses his desire to see money soon and makes it clear there will be consequences if he doesn’t.

At the same time Samuel learns of Saul’s deal with McCowan and informs Saul that the contract violates his scholarship. He’s not allowed to be signed with anyone while he’s still a student. Saul asks for Samuel’s help around the issue but Samuel’s hands are tied and he has no choice but pull Saul’s scholarship, thus ending his college career. At the same time Saul’s audience is turning on him because David is stealing all of the limelight with his great performances. He takes down all the competition and even begins putting together his own mix tapes that get play everywhere. Saul slowly begins to resent David’s success and thinks of his protégé as a traitor. Adding in David’s relationship with Michal only makes things worse. The campus newspaper even begins to promote David as Saul’s replacement as the most talented artist on campus. McCowan then approaches Saul with one final option before the violence starts. Saul has to find a way to make David sign with McCowan’s company or else.

When Saul tries to get David to sign with McCowan his efforts fail. With his back to the wall, Saul decides to make his own rules and shows up at David’s studio with a gun in his hand. He threatens David if he doesn’t do as Saul asks and even fires off a warning shot. However Jonathan helps David escape and then David’s brothers show up and threaten to kill Saul for what he did. Jonathan manages to broker a little peace but knows time is running out. The same can be said for McCowan’s patience. Done waiting around for a return on his investment McCowan orders his goons to get him some satisfaction. The goons kidnap Jonathan and beat him up, demanding to know where Saul is so they can get him. However Jonathan can’t be broken and eventually McCowan’s goons beat to death. At the same time they go to Saul’s apartment and find him dead of a suicide.

Meanwhile David is hiding out from all of the heat at the house of a close friend and relative, DEMETRIUS. Demetrius is a street smart, and book smart drug dealer looking to get out of the game. He has a nice apartment and a girlfriend he loves, as well as family in DANIEL, his own protégé, but he also has a beef with the Blackstone gang and knows retaliation is expected. That retaliation finally comes in the form of Daniel’s murder and Demetrius is devastated. His whole mindset on the game changes and he starts thinking about getting out before things get even uglier. At the same time it’s now safe for David to return to campus because Saul is out of the picture for good. David gets back to work, his popularity continuing to soar. However success begins to go to his head and he starts believing his own hype. The first victim is Michal, who has lost both of her brothers and then finds herself being ignored by David when she needs him the most.

David also begins to mess around with a married woman and uses his pull on campus to get the woman’s husband, a security guard, assigned more shifts in dangerous neighborhoods. Eventually David impregnates the married woman and soon after her husband is killed while working because of a robbery. David is spiraling down the drain and bringing others with him. The new widow then has a miscarriage and loses the baby and David finally begins to think about all of the grief he is causing. Then the big Arc of Life competition arrives and despite promises to perform and steal the show David doesn’t have it in him to get up on stage and instead chooses to give the spotlight to a talented singer songwriter named MEGAN who blows everyone away with her music. David is finally beginning to understand he needs to change his life. At the same time Demetrius makes the right decision and leaves town and his violent career behind, taking off on a train with his girlfriend, MAYA. Back with David who joins Megan in song and lets loose with a  few new lyrics showing what he’s learned through the experience.